Last week, the MOONEYES Project made some progress!

The steering column was shortened 5″.

All the holes in the firewall are now filled.

The driver side cab top is welded complete.

Passenger side is next.

“Hank” Johansson, the guy behind Mooneyes Sweden, hosts an annual bike show in the middle of the snowy cold February winter in Sweden.

The show is held at a very special place. The over 50 choppers and bobbers are showed inside a gently restored old steel mill from the early 1800s!
The area has industrial history dating back even earlier, though there are still buildings and traces that date back as far as the 1600s.
So having a classic bike show inside a building like this creates an amazing atmosphere hard to describe to anyone that hasn’t seen it in person!

Sweden has always had a very strong bike scene and the classic chopper/bobber style has been popular around this northern European country for a very long time.
The show was filled with cool Panheads, Knuckles, Indians, British bikes and of course some old Swedish Husqvarna bikes showed up too.

A few artists, pinstripers, painters and tattoo artists came to show off their stuff along side the bikes.

The show focuses on just a cool show and getting together and having a good ol’ time.
Following the show, in the evening, the party takes over and fills the old building with Rock n’ Roll and people enjoying more then just a great show.

Enjoy the pictures and perhaps we’ll see you there next February. 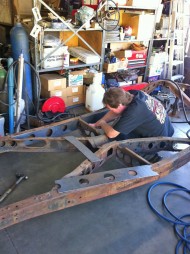 Frame is getting boxed.
We’ve decided to use a 354 Hemi we’ve had laying around.
Because of this, the chassis needs to be strengthened.

Work continues on the ’40 Ford Project. The rear cross member was straightened. Now it’s ready to get some sand blasting tomorrow.
When we get it back, we’ll start boxing the frame.

Working on the cab. Lots of lead! 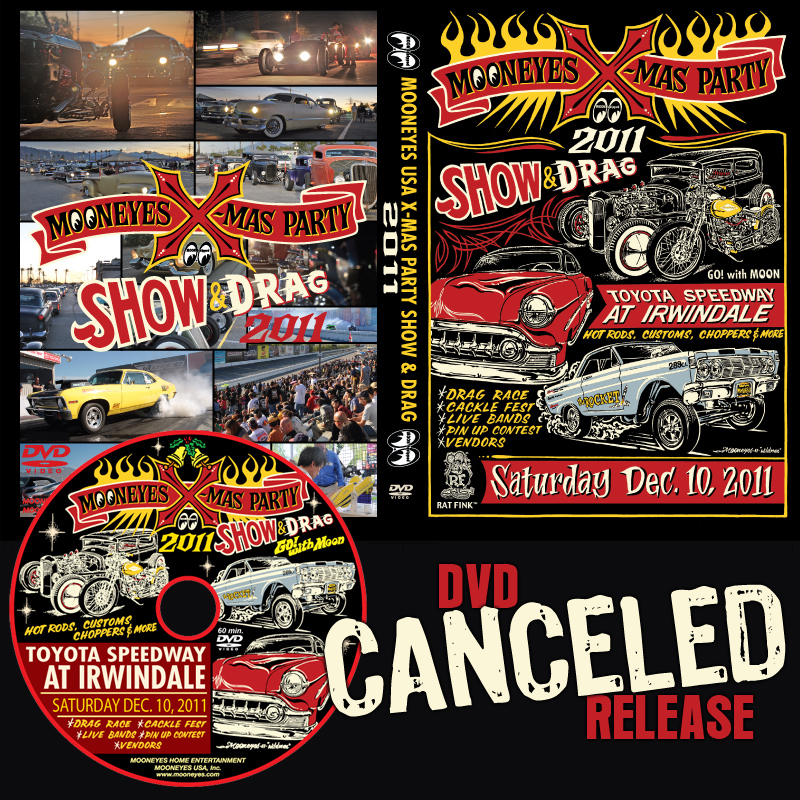 BAD NEWS: What seemed to start out in a normal flow of things, ends abruptly with no trace.

It wasn’t our “old faithful” handling the production of the MOONEYES XMAS PARTY Show & Drag 2011, as it had been for the previous years. Although the filming was said to be complete, the footage we were told was taken and the process was even reported as started, the final stage of production went astray. We even made the DVD jacket and disc label (shown above)…

It started out as “on schedule” at the end of December in 2011 but got delayed several times. After a final chase several months down the line, we lost contact. Unfortunately, we were unable to successfully reconnect and have been forced to cancel the release of our DVD. This is a disappointment for MOONEYES and the event. We were looking forward to its release as I’m sure many of you were too. We are truly sorry for the trouble and any inconvenience this may cause. MOONEYES will be more selective and critical in the future.

We got some work started on the MOONEYES Project ’40 Ford Pickup. Just a quick update with a few selected photos. All the body parts have been removed from the frame. Dean MOON, Jr. even stopped in to check it out!

I went to an event on the Queen Mary in Long Beach called “Inspiration” which was organized by Rintaro Tanaka (My Freedamn photo book publisher/photographer).
I’m not sure if it’s correct to call it secondhand clothes for this event. Whether from Rintaro Tanaka’s photo book or the obsession in Japan over secondhand clothes culture, it’s been exported to California and it’s been very popular. The event is in its 3rd year and it was a great success.

The MQQN Equipped shirt on the left is made in Japan! No doubt it’s from the ’60s. The price will make your eyes pop out of their sockets. The one next to it had a shocking price too. 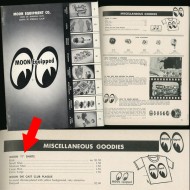 Left is 1960 catalog and right is 1968 catalog (when the shirts were originally sold).

Look at the tag, Made in Japan!! A long time ago, the cost of labor in Japan was similar to how China is now so a lot of things from foreign countries were made very cheap there. There were quite a lot of MQQN products made in Japan back in the day.
Searching for these items now are not for wearing but solely for the collector. 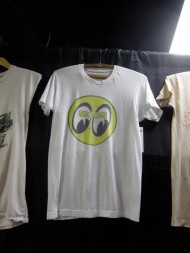 This was another shirt at a different booth.
Based on the neckline, etc. (from what I was told) it’s from the ’80s and priced at $100. 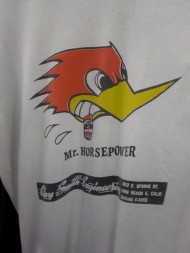 There was also Clay Smith too, with a Long Beach address! 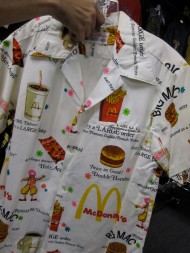 This Street Racers jacket is famous. 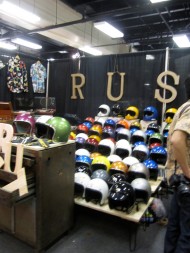 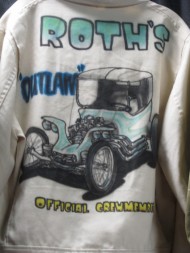 An airbrushed shirt of Roth’s Outlaw 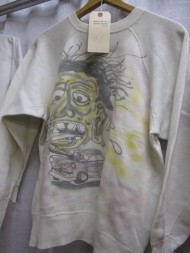 This shirt was auctioned off during the event. 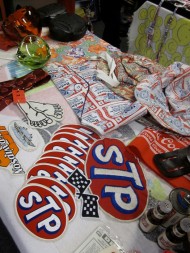 STP and Budweiser items are always cool to see.

I went with Dean to deliver goods to the NHRA Museum and from there we checked out the scene of NHRA Drag Racing Winternationals that will begin its season on the 9th (Thu).
We went on Wednesday so the pit area was quiet.
Jim Dunn Racing has a new main sponsor, a micro-brewery company called TAP IT. Also included in the same location as always, the MQQNEYES Logo can be seen on the front fender.

Dean with delivery of goods.

From the left, NHRA Museum Director, Mr. Tony Thacker, Dean Moon, Jr. and NHRA Museum curator Greg Sharp.
Without these two, the MQQN Exhibit would have never been possible.

Only available at the Jim Dunn Apparel trailer, at the race events, is this Jim Dunn/MQQNEYES T-shirt. 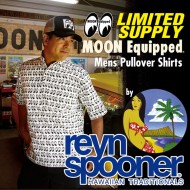 Hawaii’s Reyn Spooner manufactured MQQN Equipped Pullover Button Down Collar Shirts are on their way here! We got together again with the famous Hawaiian Shirts company Reyn Spooner for this special one-time run of these shirts. We have no plan at this time to produce more.

The sewing work was done in Korea, while the fabric was put together in Japan, made of Tahitian cotton; talk about international! Unfortunately, we decided not have them made in Hawaii. In either case, the final result was the highest quality Reyn Spooner x MQQN Equipped Shirts to date. 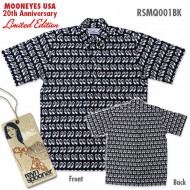 base is a MQQNEYES USA 20th Anniversary limited edition shirt with only 200 produced worldwide! That said, they are only available through MOONEYES! 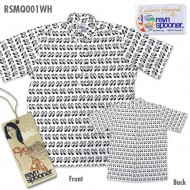 The black base shirt, as mention above, is a MQQNEYES USA 20th Anniversary limited edition version but the white base shirt is still very much limited as well with only 400 made worldwide. In total, these Reyn Spooner produced MQQN Equipped Shirts are limited to only just 600 made.

Perhaps we will make a white version MQQN Equipped Shirt some time in the future but for this special Reyn Spooner batch, this is it.

Jump to our online store ang get ‘em while ya can!
Stock arrives by early February.